Rising From The Sand

Something Different: Back in 2006 The Orange County Register offered a writing contest every once in a while to its readers. Artist Craig Pursley would create a painting and readers were to submit a short story to go along with the illustration. Here is one from June, 2006. I titled it "Rising from the Sand". 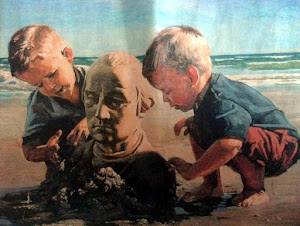 They were Fate and Determination, and they fashioned their latest works from the sands of time.

"This one will be the leader of their Army..." said Fate, the one dressed in crimson and blue. "And perhaps more."

"He certainly has the intensity for it," agreed Determination as he put the finishing touches, with a pat to the shoulder on his latest work.. His white shirt was trimmed in the same loyal blue.

Along the shore sat a myriad of others they had fashioned to fulfill the dream. Together, you could imagine Fate and Determination as two young boys building a sand fortress. But make no mistake; their purpose was a far higher calling.

Fate surveyed the shore as he took in the results of all their labor. There was one who would be the first woman to take up arms named Margaret Corbin. Over there was the author of the Declaration document, Jefferson.

Their profiles dotted the landscape along that long shore. Alexander Hamilton. Patrick Henry. John Adams. Mary Hays McCauly. There were Crispus Attucks and Henry Knox. They were made in all shapes an sizes, backgrounds and color. Their numbers seemed few, but destined to grow. The Architects of the dream continued their work along the shore.

"The success of their endeavor," said Determination, "is that they never forget the values for which they stand: Freedom, Equality. Courage. Respect. They will need them all to survive the ages."

"They will never agree," said Fate. "The very thing you supply to them can also make them stubborn, and they will make compromises that will please some and infuriate others."

"True," replied Determination. "But from the beginning they showed tremendous potential. Our Father has given them the ability to dream, and as long as they do, some will hold on to the ideal, and fight for the causes that are just. They will build a nation dedicated to the Liberty of the the Human Spirit. As long as they dare to dream, eventually all will know Freedom."

The waves of history beat against the shore. Some who were built for greatness stood strong against passing tides. Sadly, some were washed away once their work was completed. But for most, their work will prevail, and millions will know and thank God that thanks to Fate and Determination, they lived in Freedom.

And on that summer day, by the hands of the two architects by the shore, the land of the free and the home of the brave rose from the sands of time.

Posted by Robert Clemmons at 2:43 PM No comments: